Scholarships could be extended to descendants of Massive Resistance

After nearly two decades, close to $1 million in funding remains for the Brown v. Board of Education Scholarship Program.

Legislation advanced unanimously Monday to extend eligibility for the Brown v. Board of Education Scholarship Program to include descendants of students locked out of school during Massive Resistance. It still has to clear several additional votes to pass, though and will go next to the House Education Committee for further consideration.

The bill’s sponsor, Del. Kaye Kory (D-Fairfax) told VPM News that the program’s extension makes sense, because the negative impacts of Massive Resistance on the original group of students discriminated against “continue to manifest itself in disadvantages through generations.”

Nearly two decades ago, the scholarship program was established to provide free college education to Virginians locked out of school between 1954 and 1964 when districts in Prince Edward County, Warren County, Charlottesville and Norfolk closed their doors in defiance of federal desegregation orders.

A wealthy donor initially contributed $1 million to establish the fund, which was codified in 2005. The Commonwealth of Virginia was challenged to match his contribution, which the state did — Kory told lawmakers Monday. But to date, only about half of the established funds have been distributed. Close to $1 million remains.

Additionally, the original group of Virginians locked out of school is aging — with most in their 70s or older, if they’re still living. According to Lily Jones, who helps administer the program for the Division of Legislative Services, there’s been only one new applicant since 2019 when the scholarship resumed consideration of new applicants as well as two students who are renewing their scholarship but should finish in the next year or two.

“Over the years I've heard from lots of people who would like for the scholarship to be extended,” Jones told VPM News. “People who think that it was a little late for the current generation that's receiving this scholarship, but can still be useful for their descendants.”

In 2019 — the last time the scholarship committee met — the office of then-Attorney General Mark Herring presented a letter stating it wasn’t aware of any state or federal law that would prevent the General Assembly from expanding the scholarship eligibility to include descendants.

Many scholarship recipients like Rita Odom Moseley were already nearing retirement by the time they became eligible for the funds. She told VPM News in 2019 that while she did benefit from a pay increase after completing a bachelor’s degree, she didn’t receive a pay hike after getting her master’s.

Odom Moseley received her bachelor’s degree from historically Black St. Paul’s College in Lawrenceville while working full-time for Prince Edward County Public Schools. Odom Moseley said that the college — which closed in 2013 due to declining student enrollment and financial problems — accommodated the schedules of scholarship recipients by bringing professors to the Robert Russa Moton Museum for evening classes.

More Brown v. Board of Education Scholarship Program recipients studied at St. Paul’s than any other four-year Virginia institutions, according to the scholarship’s fiscal reports.

Odom Moseley thought about pursuing a doctorate degree, too, but decided against it, saying, “I know the benefit I would get would be a title, but I’ve never been about titles.”

She said it would be wonderful if scholarship eligibility is extended to descendants, because her 24-year-old granddaughter would likely be interested — if residents outside of Virginia are allowed to participate. Right now, the scholarship is limited to Virginia residents; her granddaughter lives in North Carolina, where she runs a nail spa.

“The last time I talked to her, she said she had thought about getting some education,” Odom Moseley said.

Cainan Townsend, the Moton Museum’s managing director, has spread the word about the scholarship program over the years. He thinks that should the legislature expand eligibility, many Prince Edward County lockout descendants still living in the area would be interested — himself included.

Townsend said he’s considered pursuing a doctorate degree to further his expertise at the Moton Museum, but hasn’t because he doesn’t want to take on more student debt.

Townsend’s father, three of his dad’s siblings and numerous cousins were among those locked out of school in Prince Edward during Massive Resistance. His great-grandfather John Townsend — as well as great-aunts Mildred and Arlene Townsend — was a plaintiff in Brown v. Board of Education. Townsend said the school closures impacted his father’s education, which also affected the way Townsend’s father handled educating him: by coming up with summer homework assignments for Townsend himself.

“Because he had lost years of his education, he was very, very adamant that I did not do the same,” Townsend said, “even though it was only a two-month break versus his five-year break from school.

Townsend said the community’s mistrust in the public education system because of the school closures played out differently for other families, though, and has contributed negatively to the county’s adult literacy rate and financial well-being.

“We hear stories in the late ’60s when kids go back to school, teachers send home homework, and the parents might send back a note and say, ‘I didn't go to school, and that turned out fine. My kid doesn't need to go to school, the only reason they’re here is because of truancy laws. And so, if you send these textbooks home again they’ll become firewood,’” Townsend said. “That attitude certainly prevails in a significant way to this day, in a lot of ways.”

Townsend said he believes the number of Prince Edward County residents living just at or above the poverty level can be directly traced back directly to Massive Resistance. In 2021, the median household income was just under $50,000. Additionally, he said many higher-paying jobs in the county — including at an area hospital and two colleges — require at least a master’s degree.

“To work and live here and be middle-class or upper-working class, you need education,” Townsend said. “So, I can't say enough how much this would impact folks here, because that financial determinant [to seeking a college degree] would be removed for so many people.”

VPM News wants to hear your responses to one question: What do you want to learn about the most during the 2023 General Assembly session? 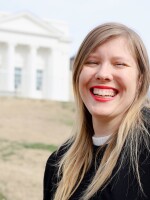